You are here: Home / “Authors in the Afternoon”

“Authors in the Afternoon” 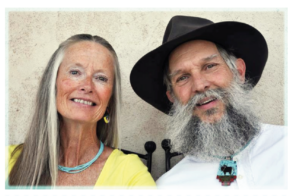 Join us for the first in the “Authors in the Afternoon” series as we proudly host best-selling authors and archaeologists W. Michael Gear and Kathleen O’Neal Gear. This dynamic husband-and-wife literary duo have over 17 million copies of their books in print world-wide, which have been translated into at least twenty-nine languages.

W. Michael Gear has published nearly two dozen novels under his own name, and he has co-authored another 37 with Kathleen. His recently released books include: Unreconciled, Flight of the Hawk: The Plains, Pariah, and Star Path. His latest sci-fi mystery, Alpha Enigma, will be available soon. Michael’s amazing writing runs the gamut from historical, to prehistorical, to science fiction, to modern thrillers.

Kathleen O’Neal Gear has over 200 non-fiction publications in the fields of archaeology, history, and bison conservation, and she has authored or co-authored 47 international bestsellers. She has received numerous awards, both for her writing and for her work as an archaeologist. The U.S. Department of the Interior has twice awarded her a “Special Achievement Award” for outstanding management of America’s cultural resources. Kathleen’s most recent books include Cries from the Lost Island, Maze Master and People of the Canyons, which she co-authored with her husband. With the Spring 2021 publication of Ice Lion, the first book in Kathleen’s much-anticipated cli-fi trilogy, she will have authored twelve novels under her own name.

“Authors in the Afternoon” ticketed special events spotlight popular regional authors who will not only provide in-person presentations and audience conversation, but will also be available to sign and sell their most recent publications.

Jefferson County Library Foundation is a 501(c)(3) nonprofit organization whose mission is to support and enrich the capabilities, resources and services of the Jefferson County Public Library through fundraising and advocacy efforts that benefit our diverse community.

Share this with your friends & family!
Scroll to top